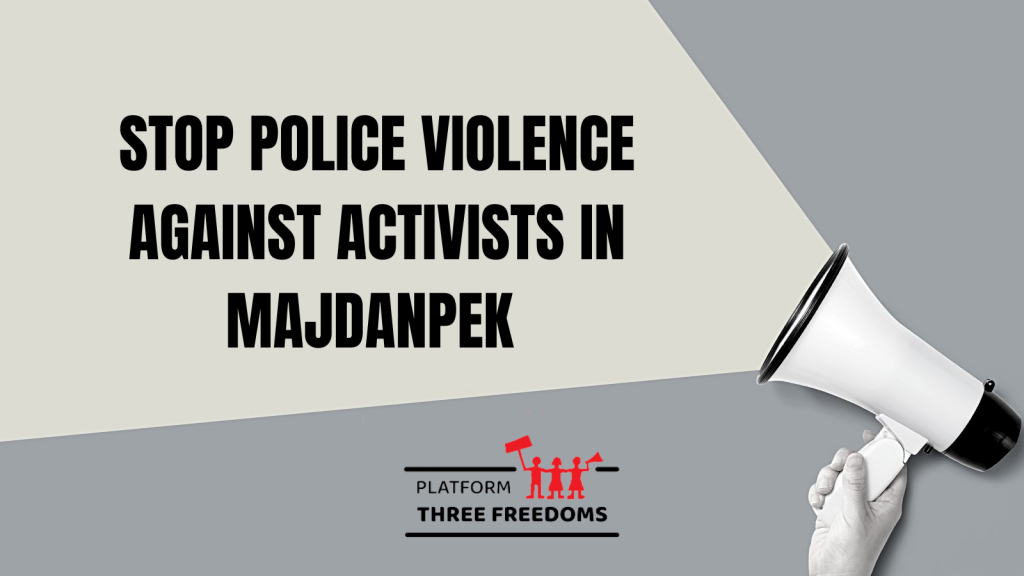 Civil society organizations gathered around the “Three Freedoms” Platform demand an immediate reaction by the institutions to allegations of violence by the police against environmental activists protesting against the mining of Starica Mountain in Majdanpek, including beatings, forcing confessions and preventing contact with lawyers and family members.

According to our knowledge, two environmental activists from Majdanpek are currently in custody in Negotin, where they have been unlawfully denied the right to contact their lawyers. The lawyers, as well as their family members, have no information about their condition since they were taken to the police station for questioning on the night between September 27 and 28. After their stay at the police station, they were next seen at the entrance to the Health Center in Majdanpek, where the eyewitnesses stated that they had visible injuries, that they were in a serious condition, and that they could not walk independently. The witnesses further stated that they were taken directly to custody from the emergency medical service at the Health Center, after which neither the family nor their lawyers could establish contact with them.

Yesterday, the testimony of activist Dragan Dmitrović was published, who stated that during the interrogation, two inspectors hit him on the head and back with their fists, and threatened to kill him, trying to force him to sign a pre-prepared false statement incriminating three other activists. Dmitrović also stated that in the station, one of the above-mentioned activists was brought into the room with him, who is currently deprived of his liberty, and who seemed scared and “frantic”, that he was “red from being beaten”, and who, afraid of further mistreatment, asked him to sign the statement.

Basic guarantees of the rights of defendants in criminal proceedings and the absolute prohibition of torture and ill-treatment are prescribed by international conventions on human rights and the Constitution of the Republic of Serbia. This behavior of police officers, with the aim of intimidating and silencing activists who fight for environmental protection, represents a gross violation of the fundamental principles of the rule of law, in which the police is a service to citizens and not a tool of repression.

We stand in solidarity with the citizens of Majdanpek, we announce that we will undertake all institutional mechanisms for these allegations to be investigated and those responsible prosecuted, and we demand:

We also announce that Civic Initiatives and the Belgrade Center for Human Rights in connection with this case submitted an initiative to the Ombudsman to immediately investigate the actions of the Ministry of Internal Affairs officials.