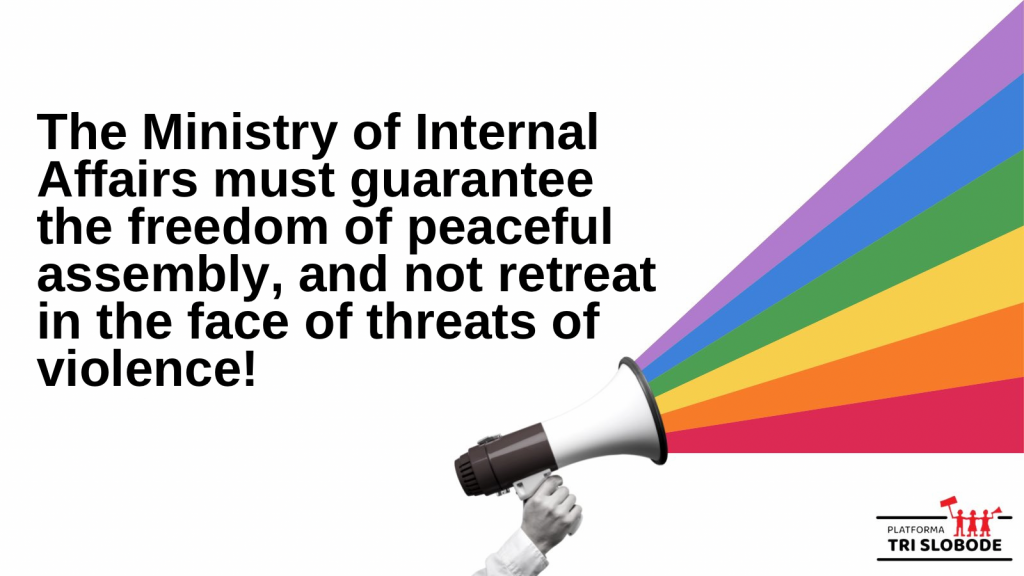 The MUP must guarantee the freedom of peaceful assembly, and not retreat in the face of threats of violence

Civil society organizations gathered around the “Three Freedoms” Platform consider the police’s decision to ban the EuroPride march scheduled for September 17, 2022 to be shameful and irresponsible. The Ministry of Internal Affairs must act without delay on the announced appeal of the organizers, cancel the first-instance decision on the ban and enable citizens to enjoy the freedom of peaceful assembly.

The danger of attacks and conflicts, as well as violence, destruction of property and disruption of public order on a larger scale in case of simultaneous holding of two announced gatherings cannot and must not be a sufficient reason for banning a peaceful gathering such as the EuroPride walk. The MUP is obliged to consider in the appeal procedure whether the danger of violent behavior originates from the participants of one or both of the announced gatherings. In a democratic society, it is inadmissible to restrict the freedom of peaceful assembly of the participants of an assembly due to threats or danger of violent behavior originating exclusively from the participants of the counter assembly.

We believe that today’s decision of the Stari grad Police Station to ban the EuroPride march is a direct consequence of the pressure that the station was exposed to by the President of the Republic, Aleksandar Vučić, and the Prime Minister-designate Ana Brnabić, who, outside of their powers defined by the Constitution and the law, announced the ban on the gathering and presented unconvincing reasons for the ban.

Today’s decision on the ban can, in any case, be understood as the state admitting that it is completely powerless to control radical right-wing groups and individuals, who in recent weeks openly called for the abolition of the freedom of peaceful assembly, which is guaranteed by the Constitution of Serbia, the European Convention on Human Rights and the International Covenant on Civil and Political Rights.

We call on the Ministry of Internal Affairs to, without delay, upon receipt of the appeal, issue a decision on canceling the pronounced ban on the EuroPride walk, and thus enable the participants of this event to hold a peaceful and dignified gathering, enjoying their democratic and human right.

A11 – Initiative for economic and social rights