27 Jul Household that swallows have chosen 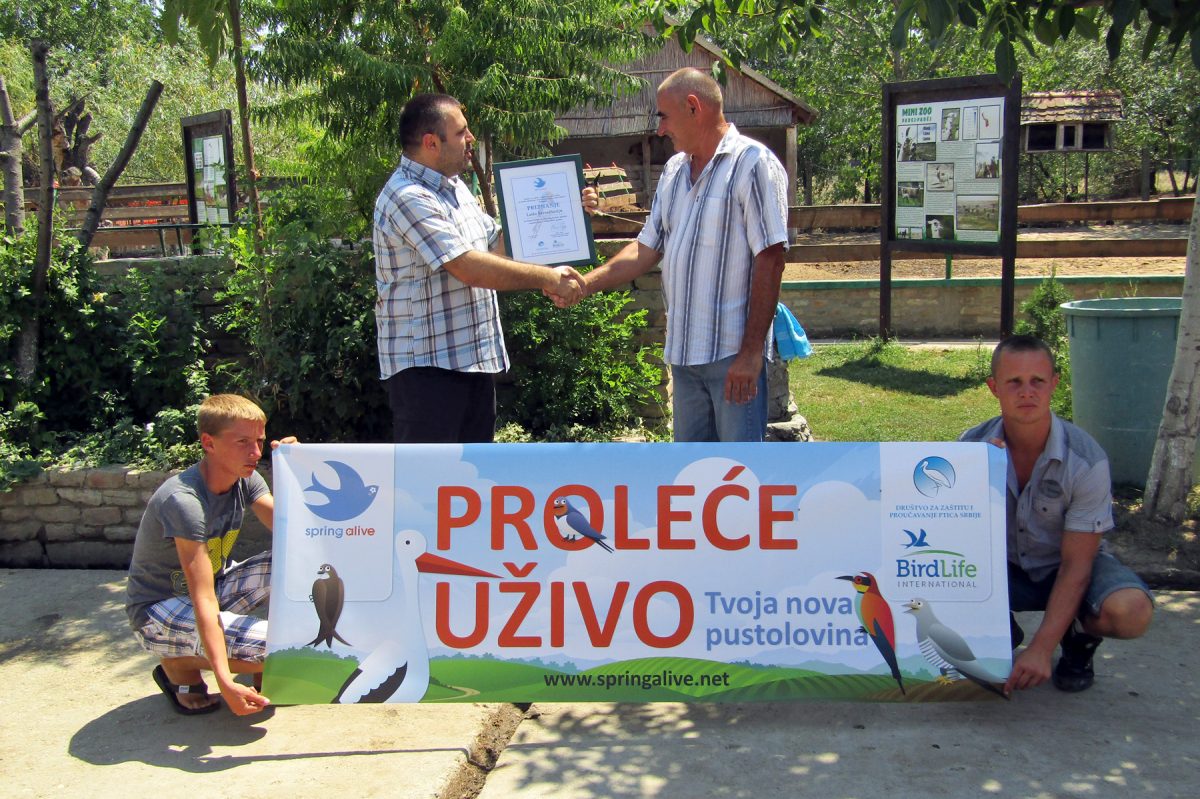 The competition “The household that swallows have chosen” which is organized in the frame of the Spring Alive program received its winners, Mr. Laslo Ševenjhazi from Padej. On his farm in Banat located on the periphery of the village, 43 pairs of barn swallows made their nests, which brought flattering recognition and 1.000 kilograms of corn as a reward to the owner.

The award ceremony was held on July 20, 2017, when the winner was visited by Milan Ružić, President of the Society for the Protection and Study of Birds of Serbia and Slobodan Knežević, coordinator of the Spring Alive in Serbia program and representatives of several media. After touring the farm and inspecting the nests, the winner was awarded the mentioned prize.

The secret link between Laslo and barn swallows is traditional cattle breeding. This farmer from Banat brings more than 60 cows, over 230 sheep and about 20 horses and donkeys on the nearby pasture everyday, which is of great importance for the preservation of the local pasture. This year, however, a major problem for cattle farmers in this region is drought, which led to reduced quality of grazing pastures and thus increased the costs of livestock breeding.

We have found the motive for organizing this competition in the fact that small farmers have less and less support, their hard work and efforts are becoming less appreciated. Laslo’s cows are freely wandering on pasture that is rich in various types of grass and give milk of excellent quality for which he receives only 24.78 dinars per liter, while big producers who have tied their cows into stables and turned them into milk-producing machines receive up to 47 dinars per liter.

In addition to quality milk coming from Laslo’s farm, his household is also responsible for the preservation of natural pasture that is of great importance for the preservation of diverse flora and fauna. Due to less and less grazing, the pastures are threatened by overgrowing and later by plowing which threatens the species that are on the verge of survival, such as ground squirrels and eastern imperial eagle, whose number in the country we can count on one hand. For this reason, traditional cattle breeding is an irreplaceable way for the wise use of pastureland.

77 households participated in the competition and they all share the pride of being chosen to share their home with barn swallows. If it were not for the stables of our worthy hosts, the question is whether we could today enjoy the beauty of barn swallows. The contest “Household which swallows have chosen” is the first in a series of competitions through which we will support small households who deal with agriculture in a traditional way.