30 Dec More than 130 cases of violations of freedom of association, assembly and expression in 2019

These freedoms are guaranteed by the Constitution and laws of the Republic of Serbia. Practice, however, shows the opposite. We are witnessing more and more frequent attacks on associations, activists and the free media. The space in which they operate is increasingly narrowed as the number of attacks, threats, intimidation and insults increases.

We believe that regularly collecting and publishing cases of violation of these rights can help to raise the visibility of this trend that is growing rapidly and draw attention to the seriousness of the problems we face.For this reason, Civic Initiatives monitor and publish, on a bi-weekly basis, cases that show violations of these rights, called the Three Freedoms Under the Magnifying Glass.

As a partner of CIVICUS Monitor for Serbia, an international mechanism that monitors the state of these freedoms worldwide, we are sending regular reports for Serbia since August 2018.

After months of monitoring, in March this year, Serbia was put on the CIVICUS Monitor Watch list, as one of the countries where fundamental freedoms are seriously threatened. Nevertheless, the drastic narrowing of the conditions for work of civil society and the whole range of violations of the rights of independent journalists and civil society organizations in Serbia continued. 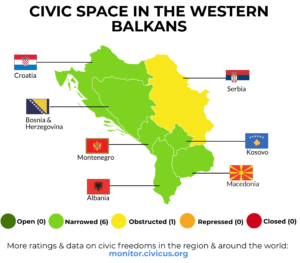 From March, when Serbia was put on the Watch List, until December 2019, we recorded more than 130 cases of violations of freedom of association, assembly and expression.

In the chart below, you can see the 10 most common civic space violations in Serbia. 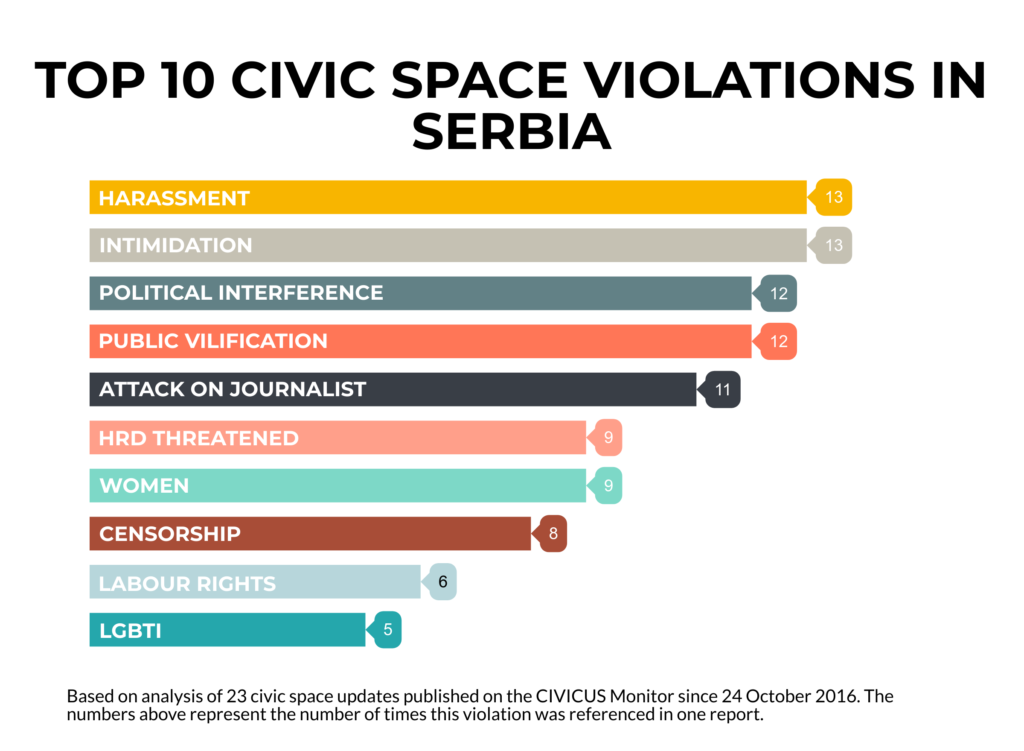 As a way to combat this increasingly difficult situation representatives of 20 civil society organisations signed in Belgrade the Three Freedoms Platform for the Protection of Civic Space in the Republic of Serbia, in order to protect and promote the freedom of association, assembly and information, during the International Civil Society Week 2019, organized by Civic Initiatives and CIVICUS, in cooperation with Balkan Civil Society Development Network. The Platform is intended to act as a joint block of civil society organizations (associations, professional organizations, foundations, endowments, and other forms of associations including informal groups of citizens) to stand for the protection of endangered freedoms and create conditions for unhindered participation of citizens in public affairs through civil society development.

In the forthcoming period, the Platform will intensify its activities in order to contribute to the democratization of society, the building of the rule of law and the active participation of citizens in the creation and implementation of reforms through the protection and full implementation of the three freedoms – association, assembly and information.

Attached is the last review for this year, which covers the period 16-27. December.