16 Sep What have Civil Society Organizations Done for the Citizens during and after the Floods? 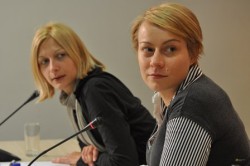 On September 16, a press conference named ‘’What have civil society organizations done for the citizens during and after the floods’’ was held at the premises of Media Center in Belgrade.

Civic Initiatives, within the activities performed under the network United citizens for Serbia (#United), have created and launched an interactive map which provides a direct insight into the work of the civil society through activities related to provision of help, revitalization and reconstruction of objects (private and public) which suffered damage from the floods. The presented map is the first public effort to systematize all activities of the civil society, and to incite public authorities to report in a proactive and transparent manner. This map originated as a product of volunteer work and engagement of the employees at the Faculty of Civil Engineering in Belgrade.

Besides the above-mentioned, a report on consequences of the floods, which has been elaborated based on the database collected by networked civil society organizations during the previous months from different areas of the country, was also presented at the conference. The collected information relate to: work of public authorities on evaluation of damage, coordination between different levels of government and relationship towards especially endangered groups. The policy of provision of aid to the vulnerable persons has also been analyzed, primarily through research of the collective centers. The report contains information collected until the end of August, 2014.